I developed this brief tutorial to help people get up and running in Inklewriter fairly quickly. (If you’re not already familiar with it, Inklewriter is a web-based authoring tool that lets you create Choose Your Own text adventure games. It can be used for many purposes, especially prototyping simulations based on branching choices.

Inklewriter is a web-based software that is used to create Interactive Fiction in the Choose Your Own Adventure (CYOA) format. Interactive Fiction (IF) is a type of computer game that lets the player read a story and make choices that can change the direction and outcome of the story. Using Inklewriter for education purposes, abstracted (text-only) simulations may be created for a variety of learning assignments.

Because IF games are mainly text-based, IF games were among the first kind ever written for computers. CYOA games are a type of IF that give the player specific choices at the end of each section These types of games are also a form of branching scenarios. The player chooses what he or she would like to do, and the branching scenario moves forward based on the player’s selections. Although no longer at the height of their original popularity, CYOA branching scenarios are still quite engaging, and they can be used on their own, or they may be developed as proof-of-concepts for more graphically-intensive simulation.

There can be many different outcomes in an CYOA branching scenario, or the story can lead the player to a single ending. It is up to the creator to decide what the player is able to accomplish. To direct the player’s path through the scenario, the creator must develop a “map” of the story. The map is an outline of the story narrative along with the decisions a player is allowed to make and the places in the story that those decisions may be made. More instruction on this will be provided later in this document.

Inklewriter is freely available. To get to Inklewriter, all you need is a computer with access to the Internet using a standard web browser. You will go to the URL http://www.inklestudios.com/inklewriter/ and your screen should look something like this: 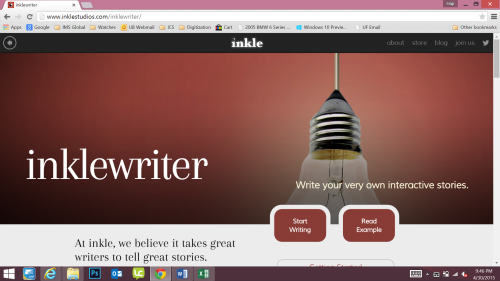 Click on the Start Writing button. When you do that, another tab will open up in your browser, and you will see this on your screen: 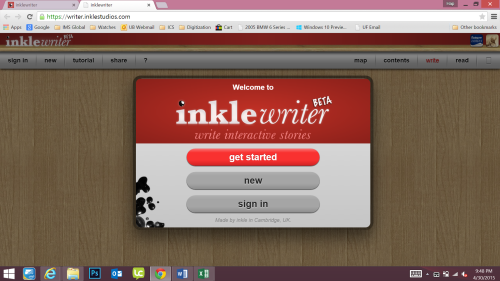 You will be able to create your own account by clicking the “sign in” button to get to the following screen. 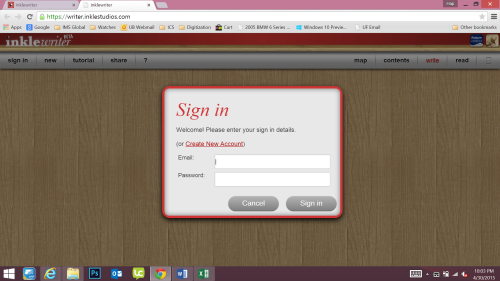 This is your “blank sheet of paper” for creating your branching scenario. You will learn how to create a basic scenario using Inklewriter, but first we will talk about planning the scenario. It is very important to have an outline of how you want your scenario to “flow” and the choices you want the player to be able to make.

How to Design a CYOA Interactive Fiction Game

The key concept behind creating a CYOA branching scenario is that you must give players the opportunities to make choices during the scenario. These choices should in some way change the actual flow of the scenario. In a traditional story (such as in a book you might read), the story flows in one direction (linearly) from start to finish, like this:

There are no choices to be made, because the storyteller, author, or instructional designer has already decided what will happen and in what order everything takes place. In a CYOA branching scenario, however, certain places in the story allow the player to choose the direction.

The above diagram is an example of a story that branches after the beginning into two different paths. The player may select one of two options, and the result be a different ending. It is possible to have many options in the middle portion of your branching scenario, and this may result in more possible endings. Below is an example.

We see that after the beginning branches into two paths, those two paths branch into two more paths before getting to the four possible endings. You can imagine how big this map could become if you added several more levels that branch in between.

Your map can be as simple or as complex as you like. And it is even possible to have the branches of the scenario come back together instead of always separating. On a map, that might look something like the following:

You can see in the above diagram that there are multiple paths that will take the player to the different endings. Although this is a more challenging scenario to create, it is often the most satisfying to play because of all the choices a player may make.

When planning your story for the scenario, you will need to do the following things:

As you write your branching scenario, the places where the story branches into different paths are where the player chooses different actions to take. For example:

You are in a field of rolling hills on a sunny day. Not too far in front of you, you see a jet fighter that has crash landed. The canopy of the jet is open, and the pilot was able to get out of the plane safely. He is sitting on the ground next to the jet.

The paragraph of text “sets the stage” for this part of the scenario. This particular scenario might be about describing historical actions taken during the Six Day War. After encountering the pilot, the player has two choices to make:

For each choice, you must decide what happens next. Let’s look at how to do this in Inlkewriter. 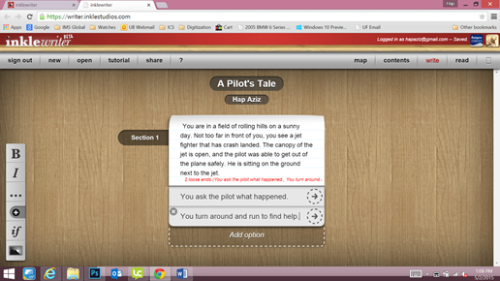 On the “blank” Inklewriter page you would type a title for your scenario (“A Pilot’s Tale” in this example), your name, and the paragraph of introductory text. Then you would click on the “Add option” button to type in your action choices:

To enter text that should be connected to the particular action, you click on the arrow button on the right side of that action. That will bring up another text box for you to enter the next section of your scenario.

To continue the story after the choice of “You ask the pilot what happened,” you should think of the next part of the story and compose the text in a way that makes sense. For example, this could be the next section (as shown above):

The pilot looks up at you and says, “We saw that Egyptian forces were being built up on our border along the Sinai Peninsula. Our air force was given the command on June 5th to launch a pre-emptive airstrike.” He pauses for a moment, and you notice that his lips are chapped.

As you build out the different areas of your scenario, you may want to check the progress of your navigation by clicking on the “map” link at the top of screen. This will bring up a visual representation of the flow of your scenario such as the one below. The map that Inklewriter displays as you create your scenario should closely resemble the outline you first made when developing your scenario idea.

From here, you will continue to add branches and narrative blocks in the same manner. You may add as many branching choices as you like to each section, but more than three or four choices becomes difficult to manage. You will continue this process until all your branching paths lead to a conclusion in the scenario.

We have only touched upon some of the most basic functionality within Inklewriter so that your first experience using the system is straightforward. There are a number of resources for Inklewriter available, and within the Inklewriter authoring system there is a “tutorial” link in the top menu bar that provides a lot of helpful information.

The Revolutionary Learning 2016 conference (#RevLearning) is taking place right now at the Roosevelt Hotel in midtown Manhattan. The following is from the website (http://revolutionarylearning.org):

Revolutionary Learning 2016 will feature hands-on workshops, educational keynotes, a Local Game Jam, a Revolutionary Game Arcade, and ample networking activities designed to connect attendees with professionals who will inspire. Colleagues and thought leaders from the cutting edge of learning will be in attendance – it’s the one place to truly learn from each other.

I won’t go into too much detail here as you can read more on the website, but the conference does address a variety of issues regarding the use of games and gaming techniques as a way to enhance engagement in learning. I’ll be doing a presentation, in fact, on engagement and the use of Interactive Fiction in the classroom to better connect with learners (http://www.revolutionarylearning.org/program/). Part of my presentation is about a classroom activity to have 8th grade students build an IF artifact using Inklewriter (http://inklestudios.com/inklewriter) as part of a history assignment. I prepared a Beginner’s Guide to Inklewriter for the students, and if you’re interested, you can download it here: BeginnersInklewriter. And if I’m motivated, I will post the presentation here. But I’d need to add notes to the picture slides first!